- Existing, single-family home sales totaled 277,440 in April on a seasonally adjusted annualized rate, down 25.6 percent from March and down 30.1 percent from April 2019.

- Year-to-date statewide home sales were down 5.4 percent in April.

LOS ANGELES (May 18) – California home sales dropped sharply in April from both the previous month and year as the housing market began to feel the full impact of the coronavirus outbreak and the state’s stay-at-home order, the CALIFORNIA ASSOCIATION OF REALTORS® (C.A.R.) said today.

Closed escrow sales of existing, single-family detached homes in California totaled a seasonally adjusted annualized rate of 277,440 units in April, according to information collected by C.A.R. from more than 90 local REALTOR® associations and MLSs statewide. The statewide annualized sales figure represents what would be the total number of homes sold during 2020 if sales maintained the April pace throughout the year. It is adjusted to account for seasonal factors that typically influence home sales.

April’s sales total was down 25.6 percent from the 373,070 level in March and down 30.1 percent from a year ago. It was the first time home sales dropped below the 300,000 level since March 2008, and the month-to-month drop was the largest since at least 1979, when C.A.R. began tracking this data. Additionally, the year-over-year decline was the first double-digit loss in 15 months and the largest decrease since December 2007.

“As expected, California home sales experienced the worst month-to-month sales decline in more than four decades as the coronavirus pandemic prompted stay-at-home orders, which kept both buyers and sellers on the sidelines,” said 2020 C.A.R. President Jeanne Radsick, a second-generation REALTOR® from Bakersfield, Calif. “While some economic activity will resume as the state gradually reopens, the housing market is expected to remain sluggish for the next couple of months as potential market participants deal with the impact of stay-in-place restrictions.”

While the statewide median price remained above the $600,000 benchmark for the second consecutive month in April, price growth showed clear signs of softening when compared to the past six months. The April statewide median price of $606,410 for existing single-family homes in the state dipped 1.0 percent from March, and the 0.6 percent gain was essentially flat from April 2019, when the median price was $603,030. The year-over-year price gain was substantially smaller than the six-month average gain of 7.8 percent recorded between October 2019 and March 2020.

“With the recession-level decline in closed home sales, the statewide median price was just barely able to avoid going into negative territory in April, in part because high-end homes saw the biggest sales declines,” said C.A.R. Senior Vice President and Chief Economist Leslie Appleton-Young. “Even with tight supply and low interest rates, home prices will continue to be tested by economic deterioration in the short term.”

Reflecting the dramatic change in market conditions, a monthly Google poll conducted by C.A.R. in early April found nearly one-third (29 percent) of consumers said it is a good time to sell, up from 26 percent a month ago, but down from 45 percent a year ago. The market uncertainty has not curbed the optimism for homebuying as much; 31 percent of the consumers who responded to the poll believed that now is a good time to buy a home, sharply higher than last year, when 22 percent said it was a good time to buy a home.

Other key points from C.A.R.’s April 2020 resale housing report include: 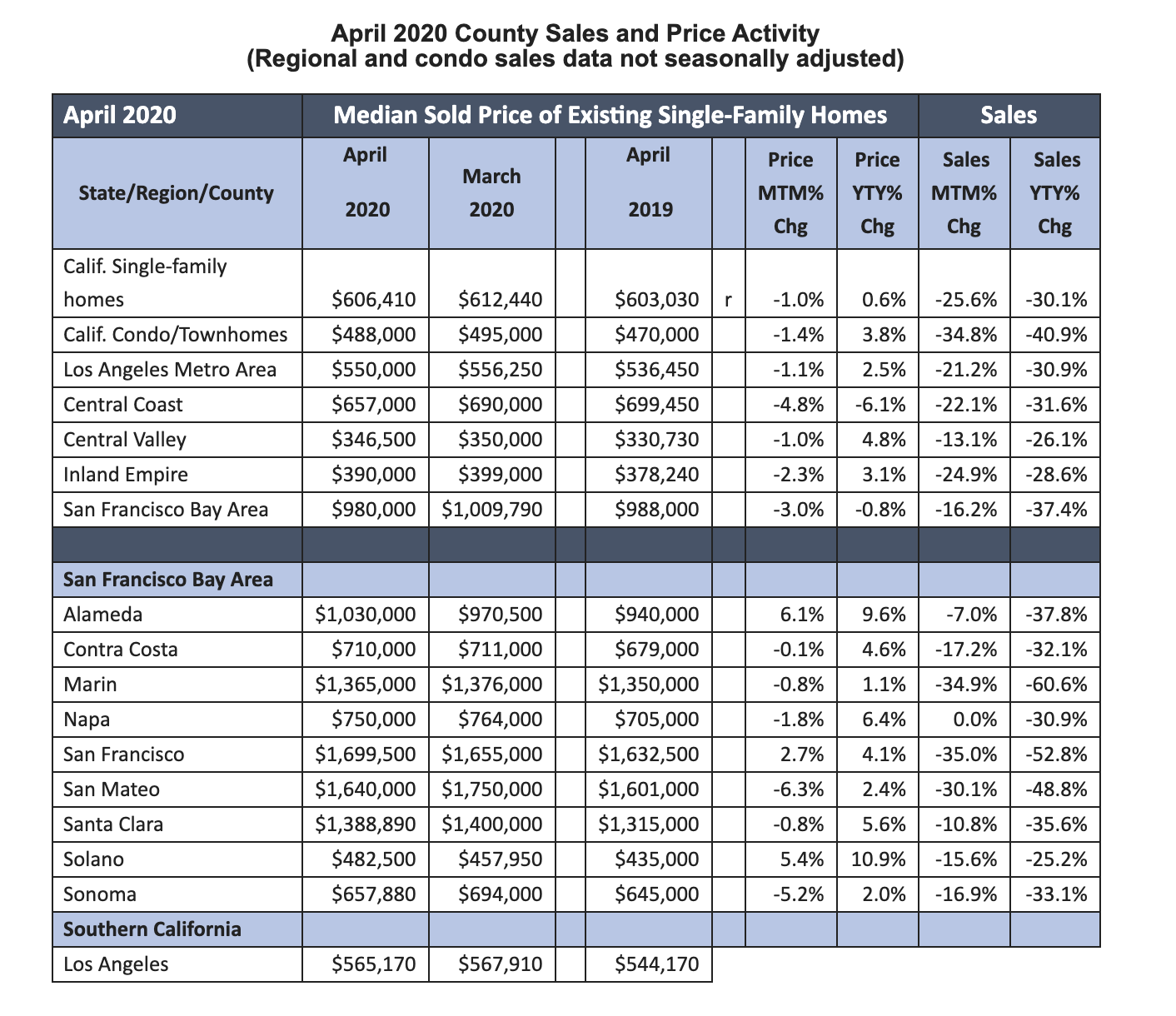 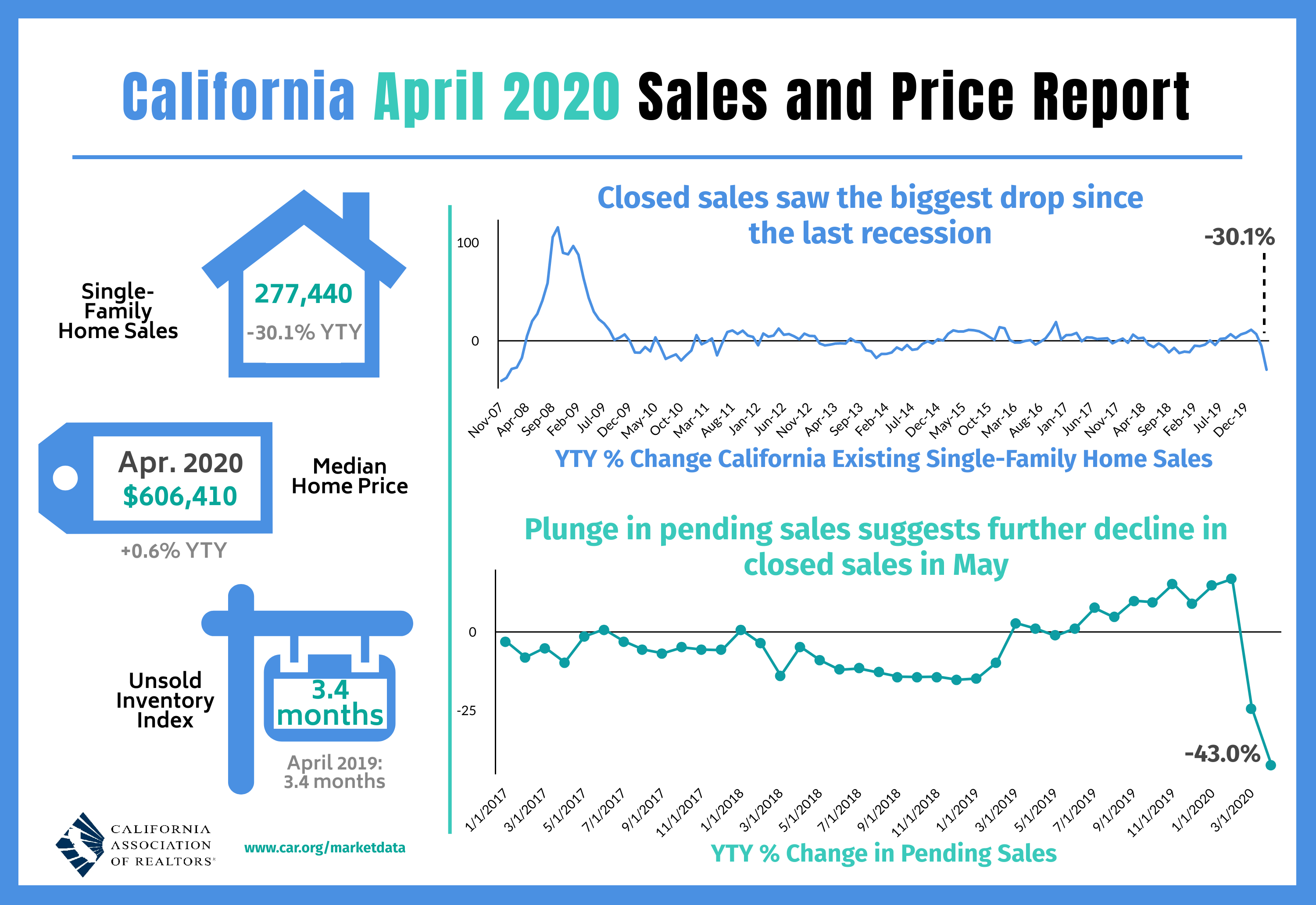