California home sales ease in May as statewide median price inches up to set another record, C.A.R. reports 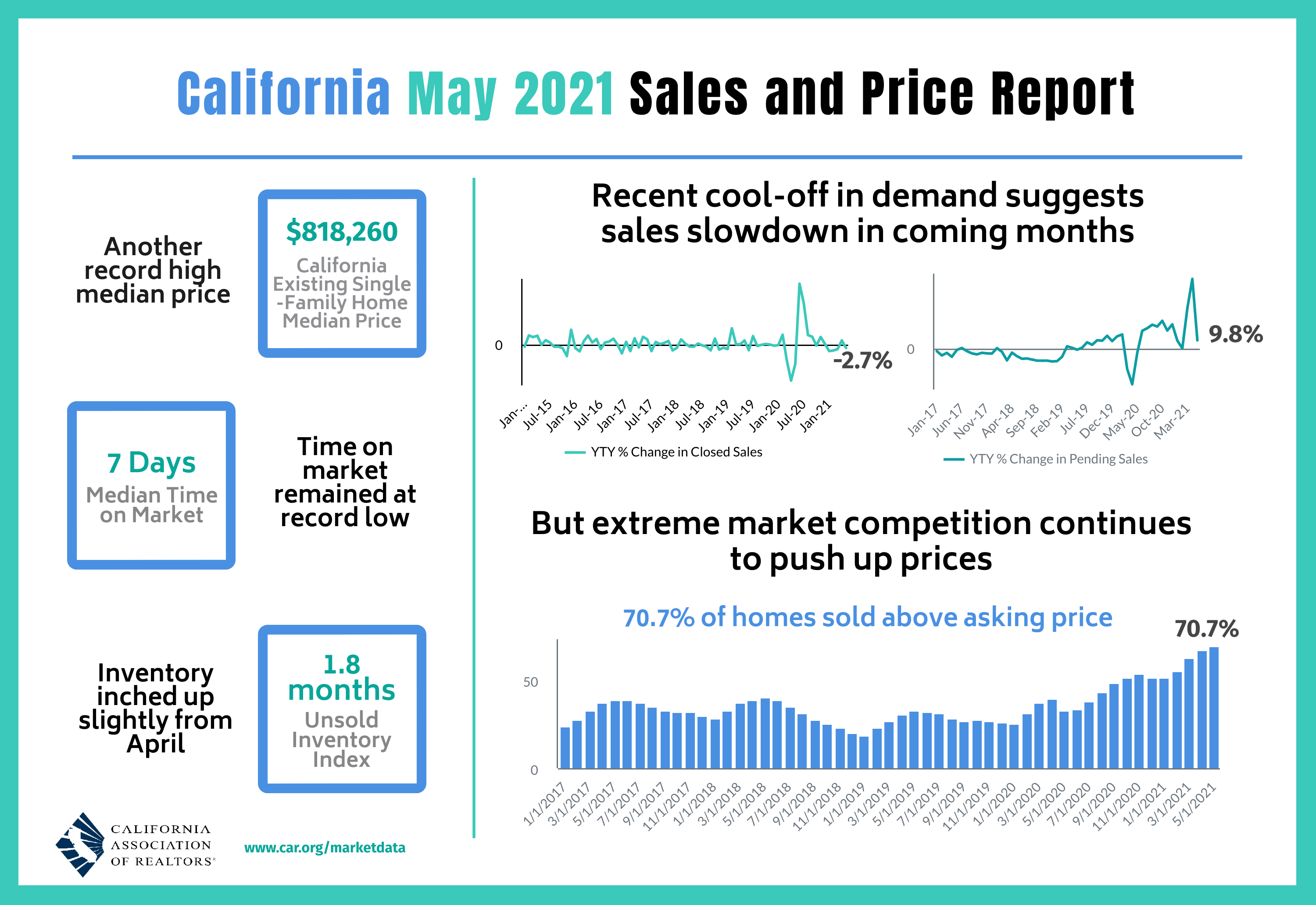 - Existing, single-family home sales totaled 445,660 in May on a seasonally adjusted annualized rate, down 2.7 percent from April and up 86.7 percent from May 2020.

- Year-to-date statewide home sales were up 34.6 percent in May.

Closed escrow sales of existing, single-family detached homes in California totaled a seasonally adjusted annualized rate of 445,660 in May, according to information collected by C.A.R. from more than 90 local REALTOR® associations and MLSs statewide. The statewide annualized sales figure represents what would be the total number of homes sold during 2021 if sales maintained the May pace throughout the year. It is adjusted to account for seasonal factors that typically influence home sales.

May home sales dipped 2.7 percent on a monthly basis from 458,170 in April and up 86.7 percent from a year ago, when 238,740 homes were sold on an annualized basis. The sharp yearly sales jump was expected as the housing market was hit hard by the pandemic shutdown last year, when home sales dropped to the lowest level since the Great Recession.

“The overheated housing market is showing signs of a much-needed cooling and could be a sign of waning buyer interest as the torrid pace of home price increases and buyer fatigue adversely affected demand,” said C.A.R. President Dave Walsh. “We’re seeing many would-be buyers taking a break and hoping to see more listings as the economy reopens and prospective sellers list their homes for sale.”

California’s median home price set another new record high in May as the statewide median price inched up 0.5 percent on a month-to-month basis to $818,260 in May, up from April’s revised $814,010 and up 39.1 percent from the $588,070 recorded last May. The year-over-year price gain was the highest ever recorded, and it was the second straight month that the state recorded an annual increase of over 30 percent.

Robust demand of higher-priced properties contributed to the record-setting statewide median price. With million-dollar home sales surging more than 200 percent from May 2020, its market share is nearly double what it was a year ago when it was at 15.6 percent. More million-dollar properties were sold in the past couple of months than homes priced below $500,000.

“A lack of housing inventory continues to push up prices, and modestly higher interest rates, increased competition, and declining affordability have caused some buyers to become discouraged. Despite strong growth rates, the level of home sales has fallen on a monthly basis in four of the last five months,” said C.A.R. Vice President and Chief Economist Jordan Levine. “Additionally, pending sales data for May, which was virtually unchanged from April, suggests further slowing in coming months. Fortunately, new listings have finally started to rise, which could help to sustain a higher level of home sales deeper into summer by providing much-needed supply.”

Other key points from C.A.R.’s May 2021 resale housing report include: 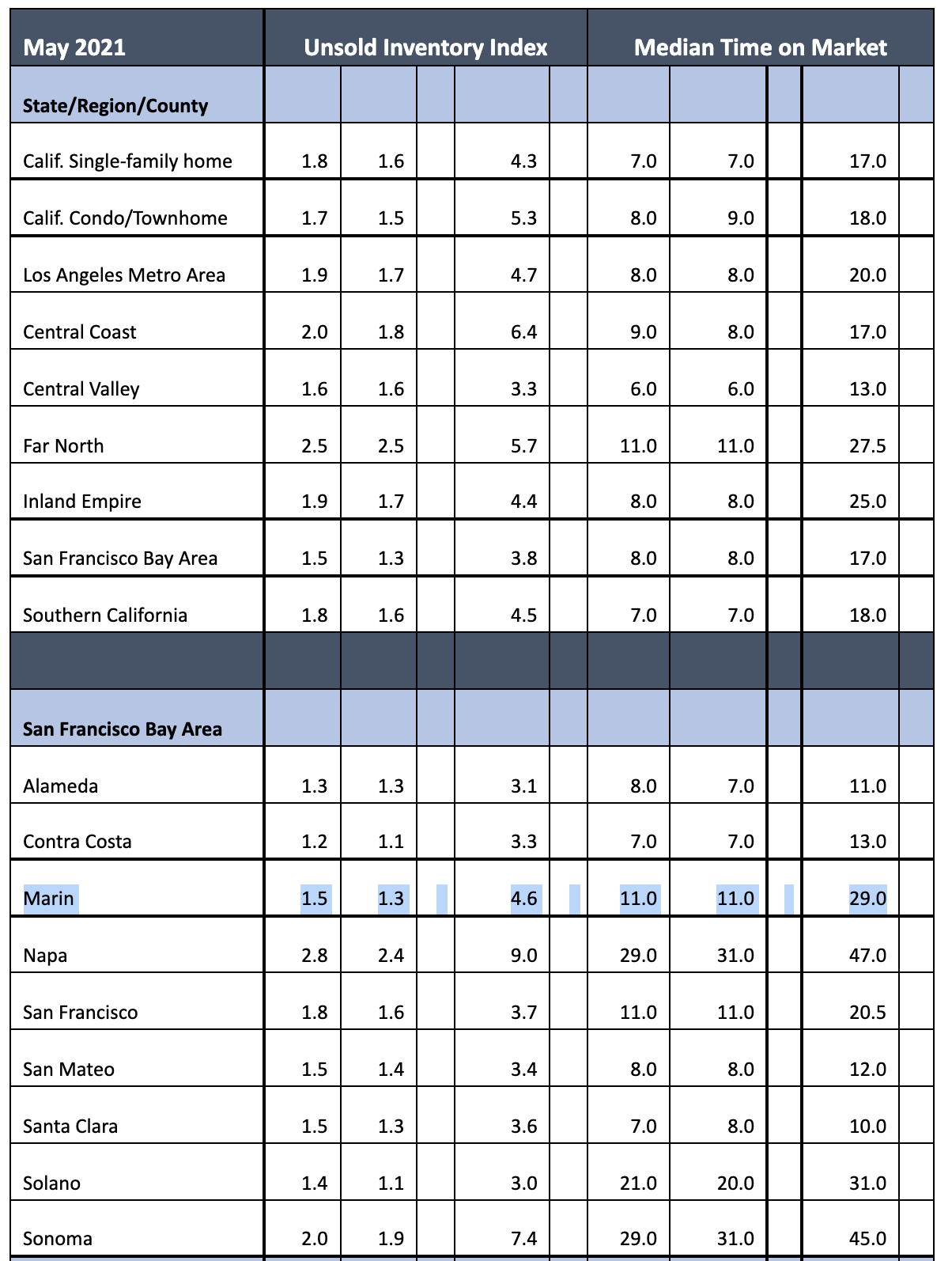