LOS ANGELES (April 19) – Housing demand in California remained strong in March as the effects of rising interest rates have yet to be borne out while the statewide median home price sets another record high, primarily due to a surge in sales of higher priced homes, the CALIFORNIA ASSOCIATION OF REALTORS® (C.A.R.) said today.

Closed escrow sales of existing, single-family detached homes in California totaled a seasonally adjusted annualized rate of 426,970 in March, according to information collected by C.A.R. from more than 90 local REALTOR® associations and MLSs statewide. The statewide annualized sales figure represents what would be the total number of homes sold during 2022 if sales maintained the March pace throughout the year. It is adjusted to account for seasonal factors that typically influence home sales.

March’s sales pace ticked up 0.5 percent on a monthly basis from 424,640 in February and was down 4.4 percent from a year ago, when 446,410 homes were sold on an annualized basis. The year-over-year sales decrease was the ninth straight decline and the smallest in eight months.

“With homes still selling at a rapid clip and more homes selling above asking price than last summer when prices were at record highs, California’s housing market continues to perform remarkably well as buyers enter the market to get ahead of rising mortgage interest rates,” said C.A.R. President Otto Catrina, a Bay Area real estate broker and REALTOR®. “An increase in active listings for the first time since prior to the pandemic should give consumers more options and alleviate some of the upward pressure on home prices, which bodes well for prospective buyers.”

California’s median home price reached a new record high in March at $849,080 — surpassing the previous record of $827,940 set in August 2021 and rising above the $800,000 benchmark for the first time in six months. The March price was 11.9 percent higher than the $758,990 recorded last March. The month-to-month percent change in median price was the highest pace since March 2013, and the 10.1 percent increase from February was the first time in nine years that the monthly price increase was in the double-digits.

A surge in sales at the top end of the market was the primary factor for the jump in the statewide median price at the end of the first quarter. The share of million-dollar home sales increased for the second consecutive month, surging to 32.9 percent in March, the highest level on record. Additionally, strong month-to-month sales growth in the San Francisco Bay Area contributed to the jump in sales of million-dollar homes statewide, as 70 percent of the region’s sales were priced above $1 million, and sales in the region increased 70.5 percent from February.

“March sales data continues to suggest strong buying interest and a solid housing market, as the effects of higher mortgage interest rates won’t be realized for a few more months,” said C.A.R. Vice President and Chief Economist Jordan Levine. “With the Federal Reserve expected to announce two back-to-back half-point interest rate hikes in May and June to combat inflation, interest rates will be elevated for the foreseeable future, adversely affecting housing demand and lowering housing affordability in the coming months, but the effects may not be visible until the second half of the year as many of the homes that are, or will be, closing were negotiated before the sharp increase in rates.”

Other key points from C.A.R.’s March 2022 resale housing report include: 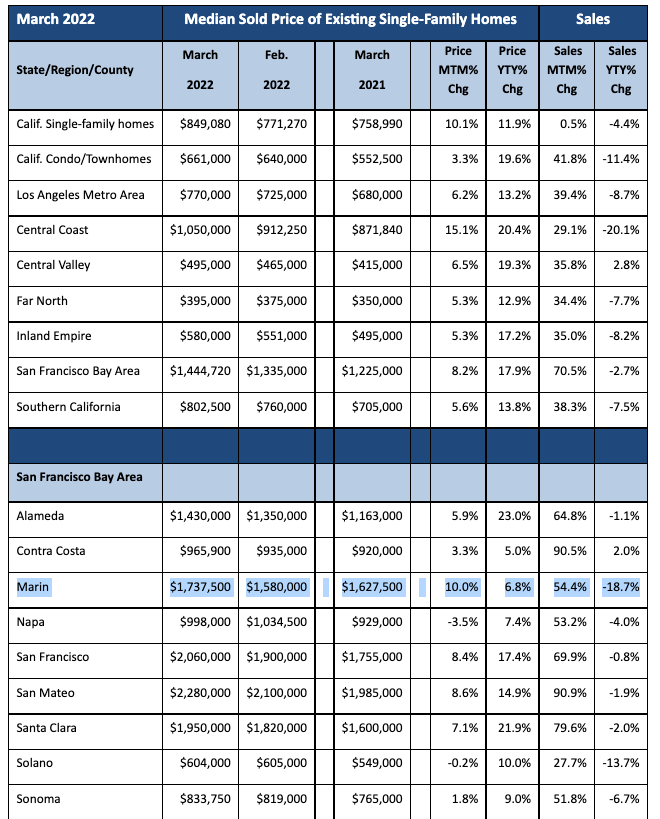 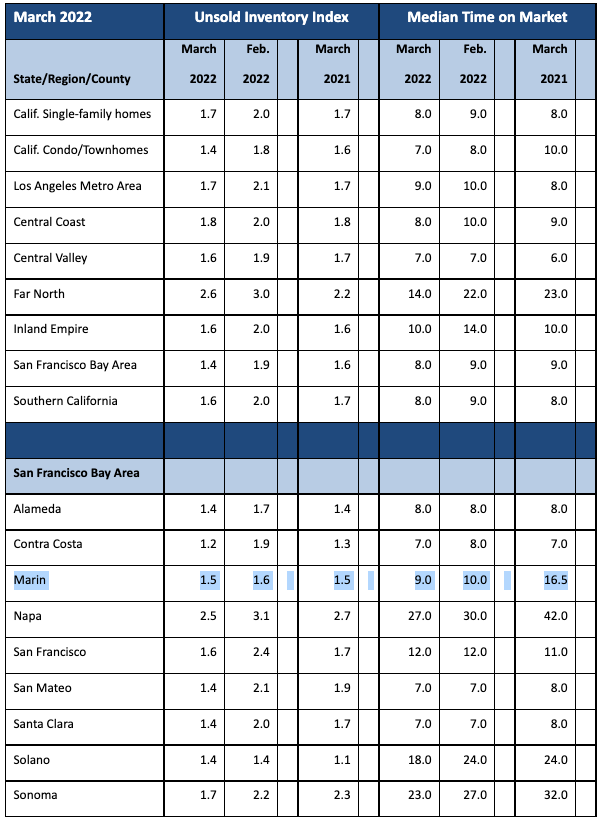