LOS ANGELES (Sept. 16) – A brief retreat in mortgage rates that created a slightly more favorable lending environment provided a window of opportunity for California homebuyers and perked up home sales in August for the first time in five months, the CALIFORNIA ASSOCIATION OF REALTORS® (C.A.R.) said today.

Closed escrow sales of existing, single-family detached homes in California totaled a seasonally adjusted annualized rate of 313,540 in August, according to information collected by C.A.R. from more than 90 local REALTOR® associations and MLSs statewide. The statewide annualized sales figure represents what would be the total number of homes sold during 2022 if sales maintained the August pace throughout the year. It is adjusted to account for seasonal factors that typically influence home sales. August’s sales pace was up 6.1 percent on a monthly basis from 295,460 in July and down 24.4 percent from a year ago, when 414,860 homes were sold on an annualized basis. August’s monthly sales increase was higher than the long-run average of 0.4 percent for a July-August period in the past 43 years and marked the first monthly sales increase in five months.

“California’s housing market stabilized briefly as a temporary reprieve on mortgage rates in July and early August brought buyers into the market,” said C.A.R. President Otto Catrina, a Bay Area real estate broker and REALTOR®. “Active listings have passed their annual peak, and while homes are taking slightly longer to sell, the share of homes seeing price reductions has also stabilized to near pre-pandemic levels. In fact, price growth in August actually picked up on both a monthly and annual basis, and pending sales suggest a bounce-back for homes priced $2 million and above.”

“It’s encouraging to see that August’s sales pace rebounded above an annualized 300,000 units sold,” said C.A.R. Vice President and Chief Economist Jordan Levine. “Although we do not expect a rapid bounce-back because the Fed is expected to continue raising interest rates to get inflation under control, the monthly increase in closed and pending sales suggests that the market may have already priced in most of the rate increases to date. Still, buyers will continue to grapple with rising costs of borrowing, which will keep home sales below the 350,000 annualized pace for the remainder of the year.”

Consumer optimism bounced back as interest rates declined in early August, according to C.A.R.’s monthly Consumer Housing Sentiment Index. Conducted in early September, the share of respondents who believed it was a good time to buy a home rose month-over-month for the third straight month to 19 percent, pushing the Housing Sentiment Index to 59, but was significantly lower than the Index of 72 in August 2021. Meanwhile, those who believed it was a good time to sell a home continued to decline to 56 percent, dropping sharply from 72 percent in August 2021. With interest rates moving upward since mid-August, housing sentiment will likely reverse direction next month. In fact, two-thirds (64%) of consumers believed that the overall economic conditions in California would not improve in the next 12 months, and three-quarters (75%) believed that interest rates would rise in the next 12 months.

Other key points from C.A.R.’s August 2022 resale housing report include:

Note:  The County MLS median price and sales data in the tables are generated from a survey of more than 90 associations of REALTORS® throughout the state and represent statistics of existing single-family detached homes only. County sales data is not adjusted to account for seasonal factors that can influence home sales. Movements in sales prices should not be interpreted as changes in the cost of a standard home. The median price is where half sold for more and half sold for less; medians are more typical than average prices, which are skewed by a relatively small share of transactions at either the lower end or the upper end. Median prices can be influenced by changes in cost, as well as changes in the characteristics and the size of homes sold. The change in median prices should not be construed as actual price changes in specific homes. 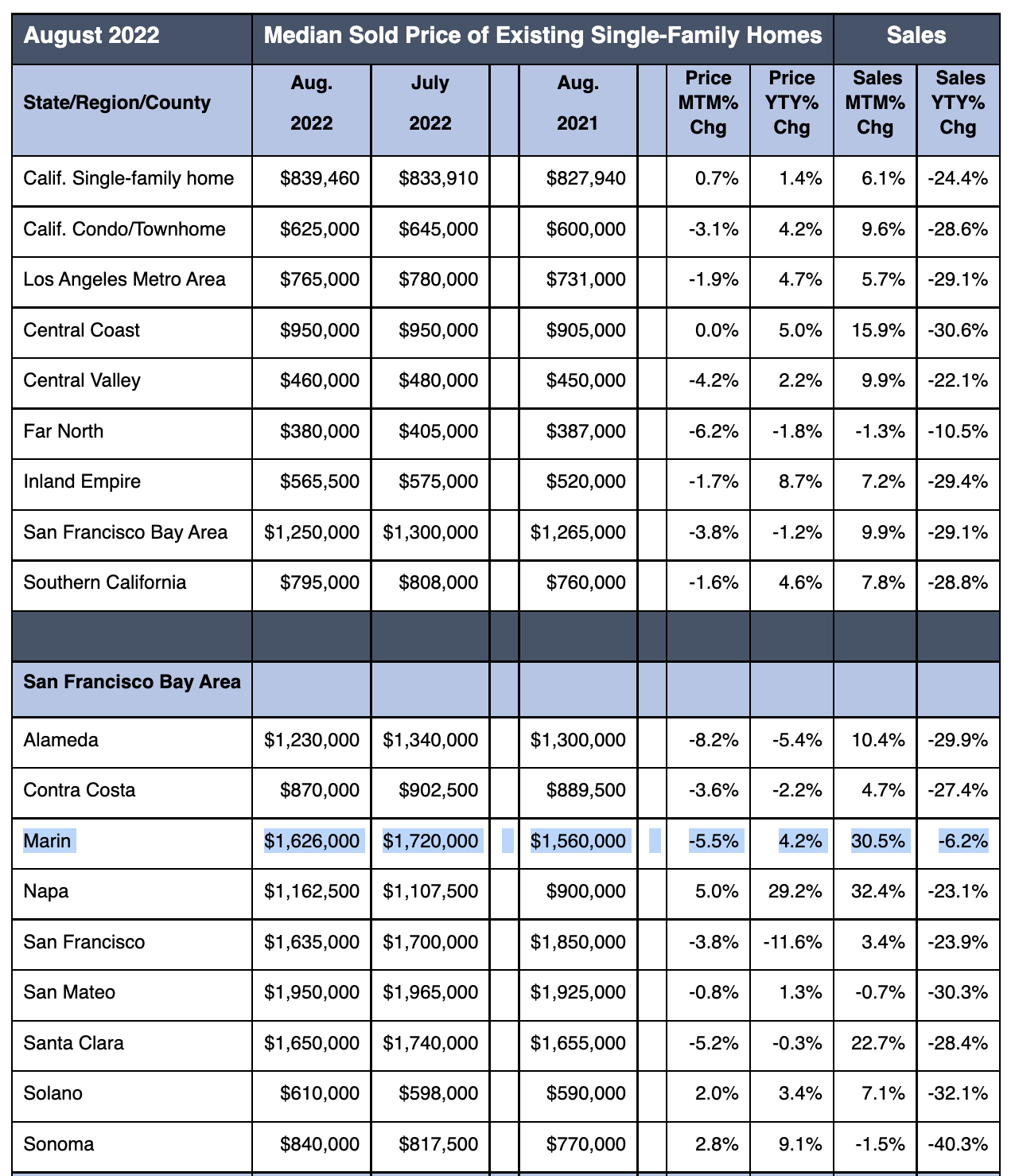 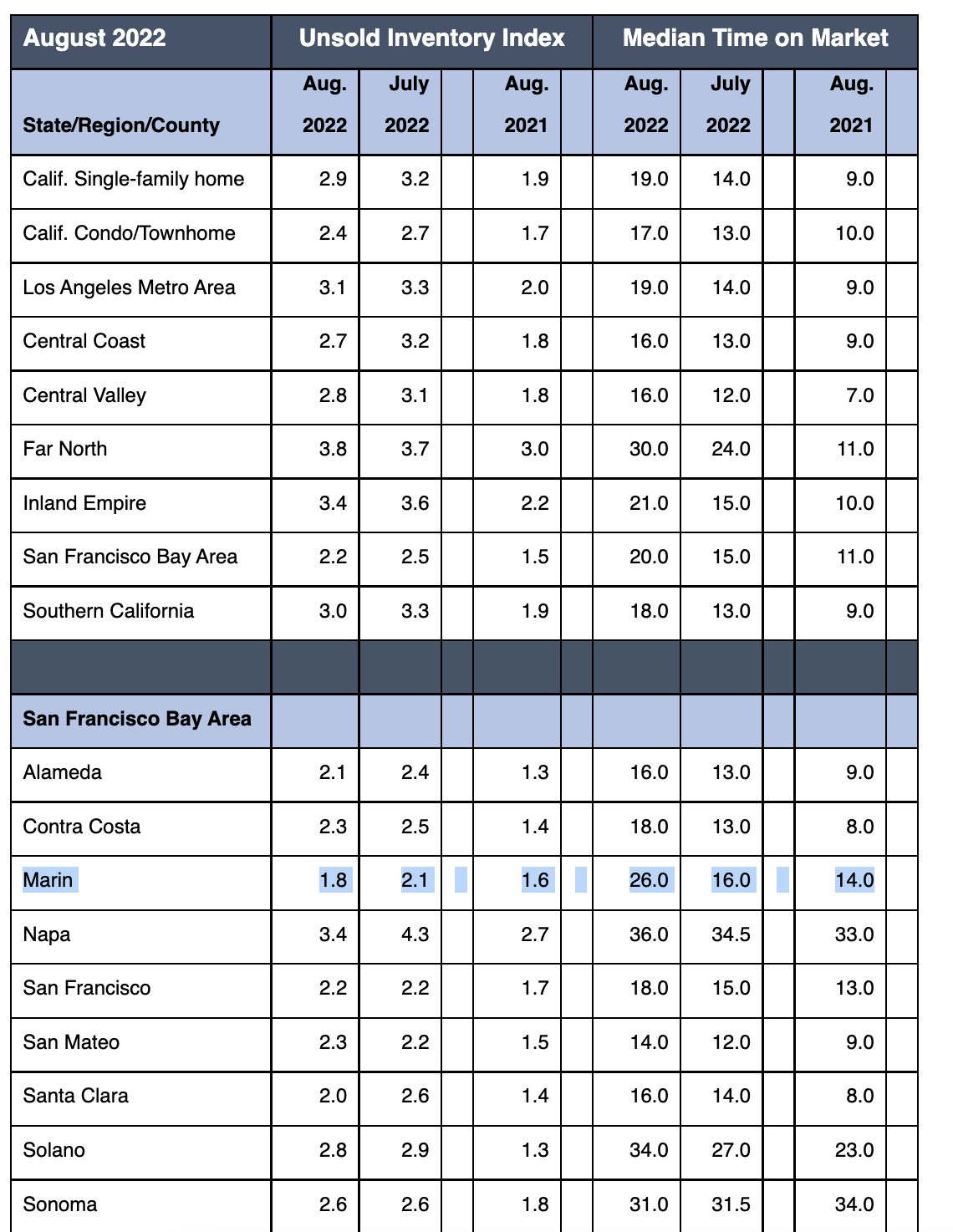