- Existing, single-family home sales totaled 509,750 in December on a seasonally adjusted annualized rate, up 0.2 percent from November and up 28 percent from December 2019.

- For 2020 as a whole, sales of existing statewide homes were up 3.5 percent from last year. 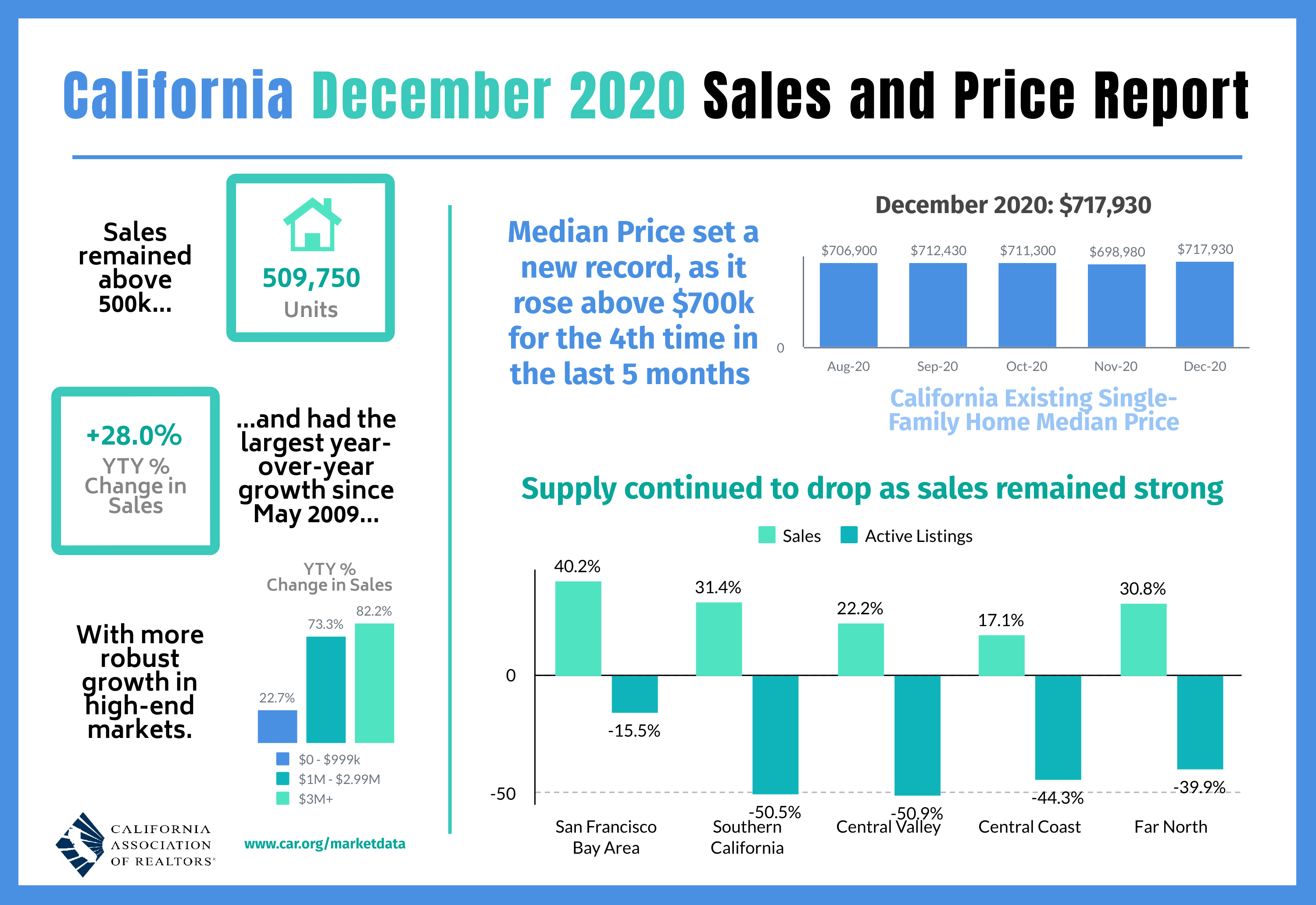 Despite a global pandemic that lingered most of the year, two lockdowns and a struggling economy, California’s housing market closed out 2020 on a high note, recording solid sales and a fifth record-high median price in December, the CALIFORNIA ASSOCIATION OF REALTORS® (C.A.R.) said today.

Closed escrow sales of existing, single-family detached homes in California totaled a seasonally adjusted annualized rate of 509,750 units in December, according to information collected by C.A.R. from more than 90 local REALTOR® associations and MLSs statewide. The statewide annualized sales figure represents what would be the total number of homes sold during 2020 if sales maintained the December pace throughout the year. It is adjusted to account for seasonal factors that typically influence home sales.

December home sales ticked up 0.2 percent from 508,820 in November and were up 28 percent from a year ago, when 398,370 homes were sold on an annualized basis. The year-over-year, double-digit sales gain was the fifth consecutive and the largest yearly gain since May 2009. For the year as a whole, annual home sales rose to a preliminary 411,870 closed escrow sales in California, up 3.5 percent from 2019’s pace of 397,960.

“It’s a testament to the strength of the market that even after the pandemic effectively shut down the spring home-buying season in 2020, the market still was able to recover the substantial sales lost in the first half of the year and even top 2019’s levels,” said C.A.R. President Dave Walsh, vice president and manager of the Compass San Jose office. “With mortgage rates expected to stay near the lowest in history, demand for homeownership will continue to be strong, so home sales should remain elevated into the first half of 2021, as motivated buyers take advantage of the increased purchasing power.”

After dipping below $700,000 the previous month, California’s median home price bounced back above that benchmark and set another record high in December. The statewide median home price rose 2.7 percent on a month-to-month basis to $717,930 in December, up from November’s $698,890. Home prices continued to gain on a year-over-year basis with the statewide median price surging 16.8 percent from $614,880 recorded last December. The double-digit increase from last year was the fifth in a row, and the month-to-month gain was higher than the long-run average of 0.8 percent observed between 1979 and 2019. The statewide median home price for the entire year was $659,380, an increase of 11.3 percent from a revised $592,230 in 2019.

“Home prices, which usually peak during the summer, were unseasonably strong in December,” said C.A.R. Vice President and Chief Economist Jordan Levine. “The imbalance between supply and demand continues to fuel home price gains as would-be home sellers remain reluctant to list their homes during the pandemic, contributing to a more-than-40-percent year-over-year decline in active listings for the seventh straight month.”

Other key points from C.A.R.’s December 2020 resale housing report include:

Note: The County MLS median price and sales data in the tables are generated from a survey of more than 90 associations of REALTORS® throughout the state and represent statistics of existing single-family detached homes only. County sales data are not adjusted to account for seasonal factors that can influence home sales. Movements in sales prices should not be interpreted as changes in the cost of a standard home. The median price is where half sold for more and half sold for less; medians are more typical than average prices, which are skewed by a relatively small share of transactions at either the lower end or the upper end. Median prices can be influenced by changes in cost, as well as changes in the characteristics and the size of homes sold. The change in median prices should not be construed as actual price changes in specific homes. 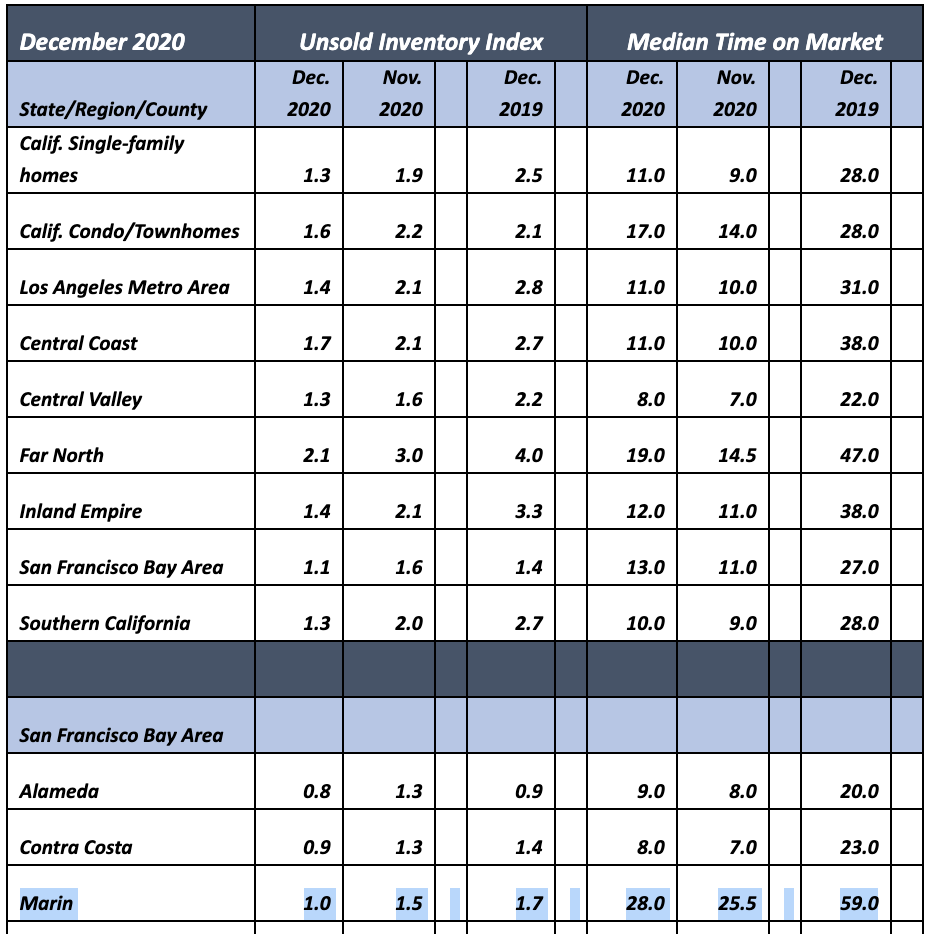 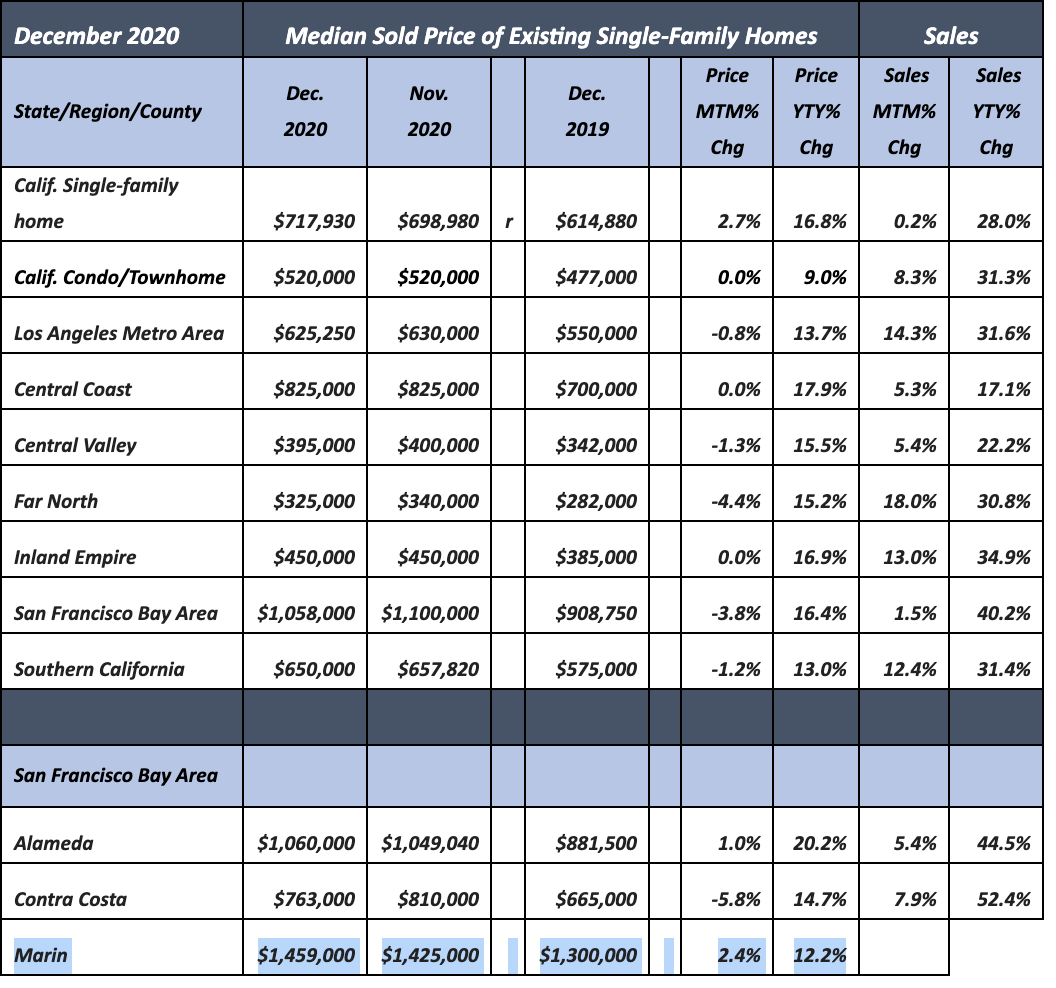