LOS ANGELES (May 17) – California home sales retreated in April as rising interest rates and higher home prices depressed housing demand even as the statewide median home price set another record for the second straight month, primarily due to strong sales at the top end of the market, the CALIFORNIA ASSOCIATION OF REALTORS® (C.A.R.) said today.

Closed escrow sales of existing, single-family detached homes in California totaled a seasonally adjusted annualized rate of 419,040 in April, according to information collected by C.A.R. from more than 90 local REALTOR® associations and MLSs statewide. The statewide annualized sales figure represents what would be the total number of homes sold during 2022 if sales maintained the April pace throughout the year. It is adjusted to account for seasonal factors that typically influence home sales.

April’s sales pace was down 1.9 percent on a monthly basis from 426,970 in March and down 8.5 percent from a year ago, when 458,170 homes were sold on an annualized basis. The month-to-month April sales decline is in line with the long-run change of -1.6 percent recorded between March and April. The annual sales drop, however, was the biggest decline in the last four months. On a year-to-date basis, sales were down 7.4 percent in April.

“As rates remain on the rise, the sense of urgency to buy is keeping the market highly competitive, especially since housing inventory continues to stay well below pre-pandemic levels,” said C.A.R. President Otto Catrina, a Bay Area real estate broker and REALTOR®. “While we will likely see more listings come on to the market as we move further into the home-buying season, the housing shortage issue will likely persist throughout the rest of the year in major metropolitan areas, such as the Bay Area and the Southern California region.”

California’s median home price set another record in April at $884,890 — surpassing the record of $849,080 set just the previous month. The April price was 4.2 percent higher than the $849,080 recorded in March and 8.7 percent higher than the $814,010 recorded last April. The year-over-year increase was the smallest since June 2020 but was strong enough to establish a new peak price for the state. The month-to-month percent change was higher than the long run average of 2.3 percent recorded between a March and an April in the last 43 years.

A change in the mix of sales continues to play a role in statewide record-setting home prices as sales in high-priced markets remain stronger than their more affordable counterparts. The share of million-dollar home sales increased for the third consecutive month, reaching the highest level on record at 34.7 percent. Home sales priced below $500,000, meanwhile, dipped again in April and hit the lowest level ever. Sales dropped by double-digits for price segments $750,000 and below, while sales above $2 million remained on the rise on a year-over-year basis. The shift in the mix of sales toward high-end homes is expected to persist in the upcoming months.

“California’s housing market is moderating from the 12-year-high levels experienced in 2021, as higher mortgage interest rates and soaring home prices are starting to have an adverse impact on housing demand,” said C.A.R. Vice President and Chief Economist Jordan Levine. “With April pending home sales recording the worst drop in two years, the affordability challenges that buyers have been encountering are materializing in recent sales trends, and further declines in housing demand could continue in the second half of the year.”

Other key points from C.A.R.’s April 2022 resale housing report include: 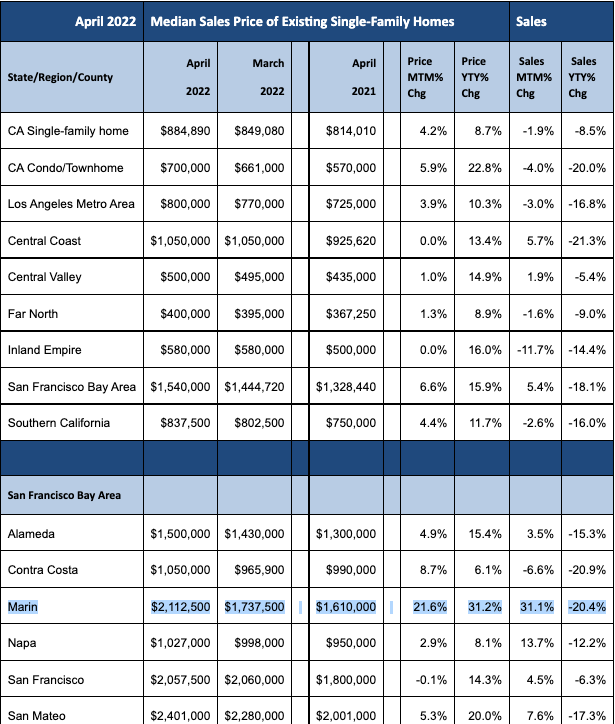 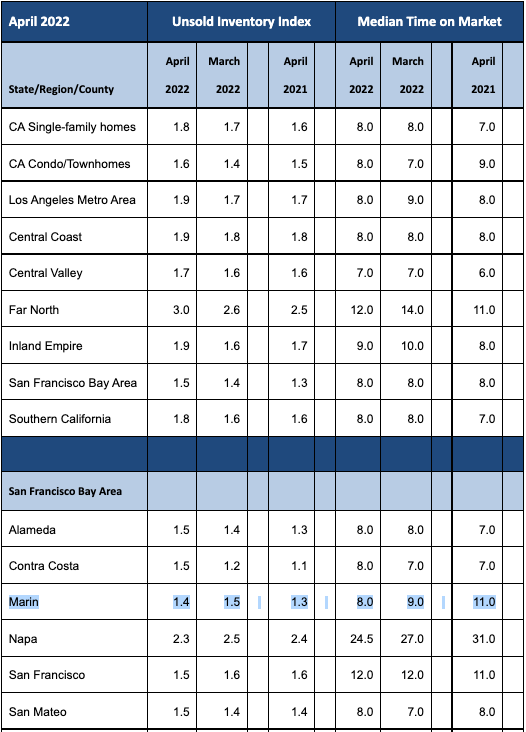