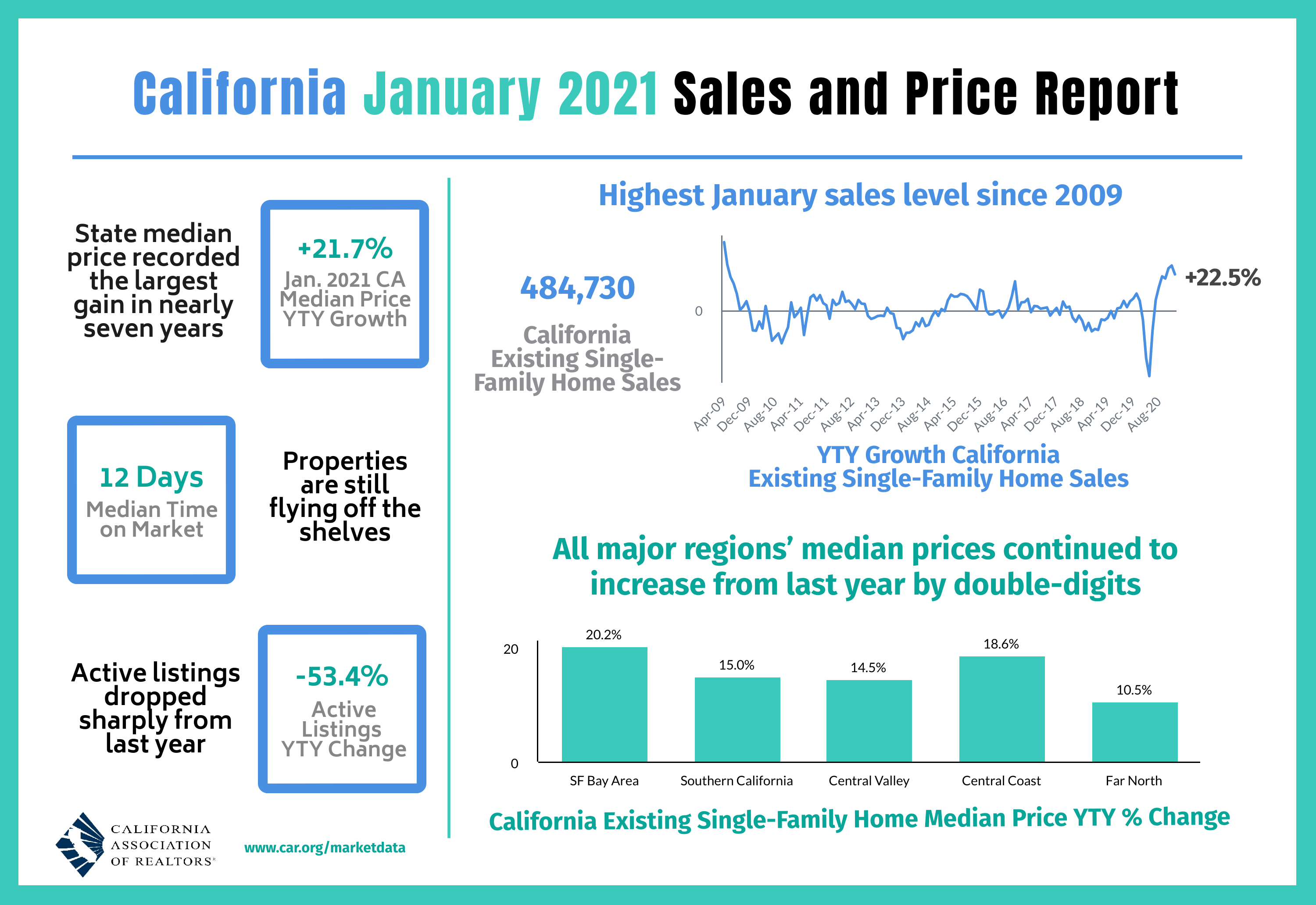 - Existing, single-family home sales totaled 484,730 in January on a seasonally adjusted annualized rate, down 4.9 percent from December and up 22.5 percent from January 2020.

LOS ANGELES (Feb. 19) – California’s housing market kicked off the year on a positive note, following up on December’s strong showing with double-digit price and sales growth on a yearly basis in January, the CALIFORNIA ASSOCIATION OF REALTORS® (C.A.R.) said today.

Closed escrow sales of existing, single-family detached homes in California totaled a seasonally adjusted annualized rate of 484,730 in January, according to information collected by C.A.R. from more than 90 local REALTOR® associations and MLSs statewide. The statewide annualized sales figure represents what would be the total number of homes sold during 2021 if sales maintained the January pace throughout the year. It is adjusted to account for seasonal factors that typically influence home sales.

“Despite an economy that’s slow to recover, the momentum from late last year continued into January, driven by strong growth in California’s core housing markets, especially in the San Francisco Bay Area, where the higher cost areas experienced the most sales growth,” said C.A.R. President Dave Walsh, vice president and manager of the Compass San Jose office. “Home prices continued to power through the traditional slow season in January with the largest annual price gain in nearly seven years.”

After hitting a record high price the previous month, California’s median home price dipped below the $700,000 benchmark in January. The statewide median home price declined 2.5 percent on a month-to-month basis to $699,890 in January, down from December’s $717,930. Low rates and tight supply continued to push up home prices on a year-over-year basis, gaining 21.7 percent from the $575,160 recorded last January. The double-digit increase from last year was the sixth in a row and the largest since February 2014.

“With the COVID-19 vaccine continuing to roll out, another fiscal stimulus relief package likely on the way and historically low interest rates, the housing market will continue to thrive,” said C.A.R. Vice President and Chief Economist Jordan Levine. “The market outlook is stronger than previously projected as buyer demand continues to outstrip supply, but we do expect the current robust market growth to decelerate later this year as the housing shortage intensifies.”

Other key points from C.A.R.’s January 2021 resale housing report include: 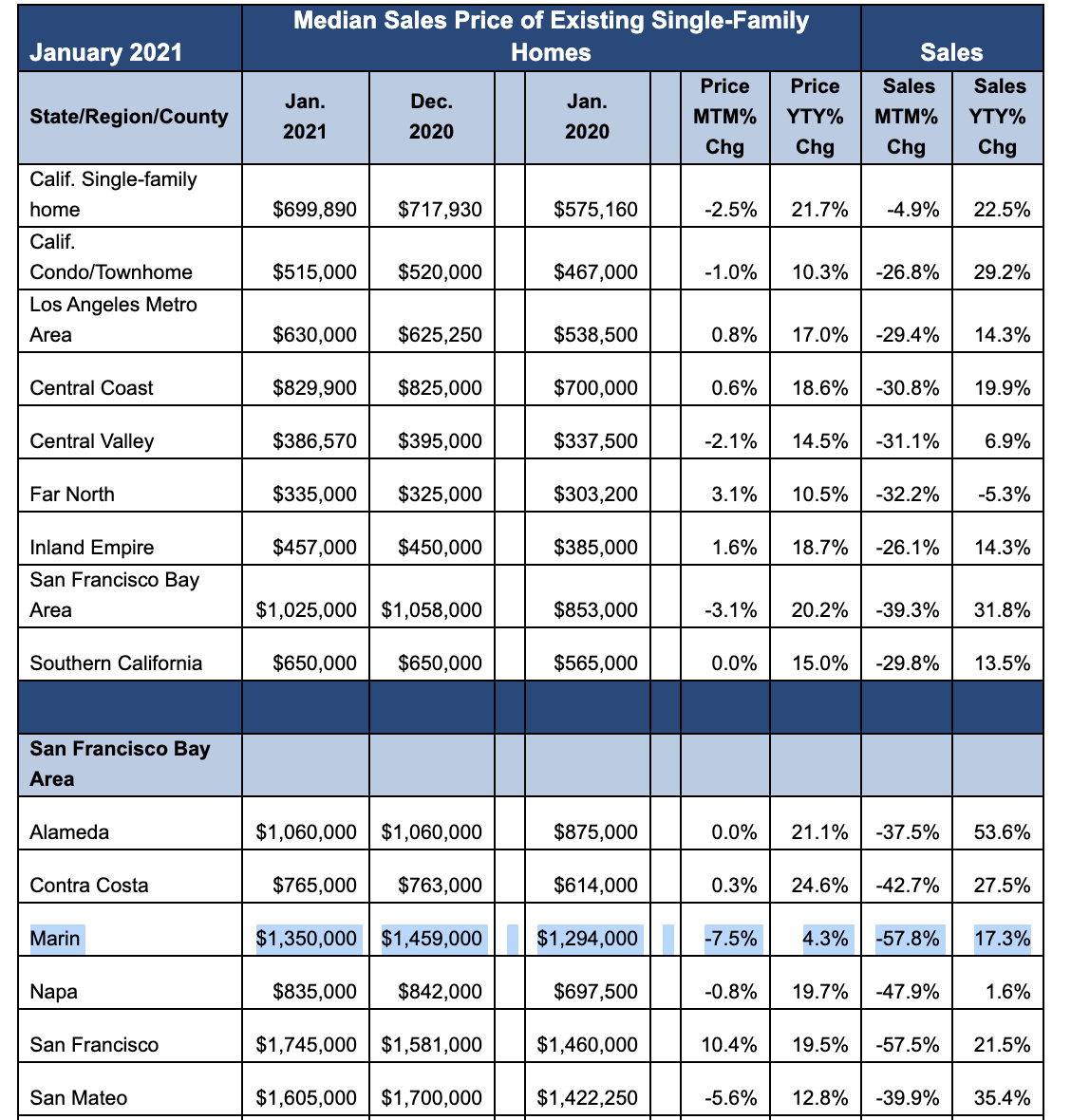 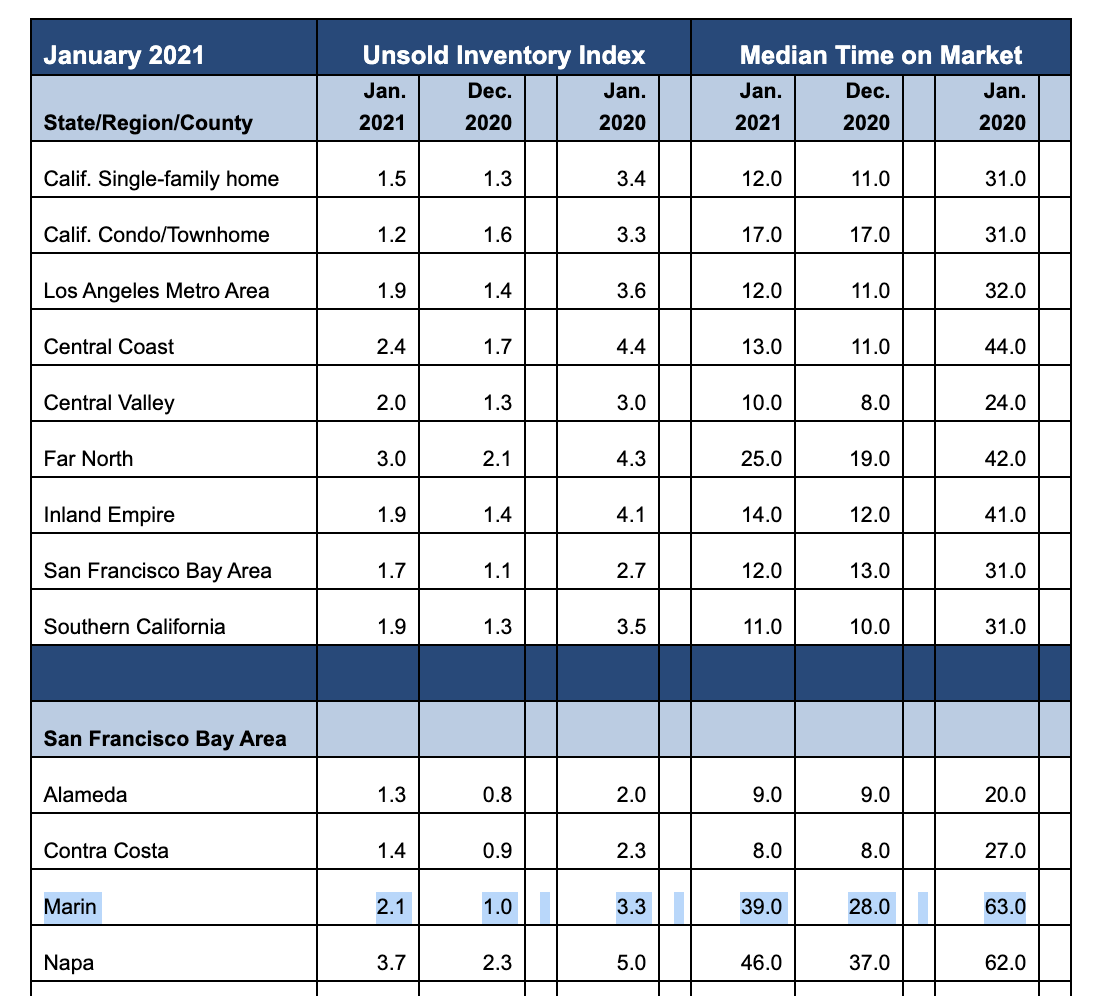