Closed escrow sales of existing, single-family detached homes in California totaled a seasonally adjusted annualized rate of 454,450 in November, according to information collected by C.A.R. from more than 90 local REALTOR® associations and MLSs statewide. The statewide annualized sales figure represents what would be the total number of homes sold during 2021 if sales maintained the November pace throughout the year. It is adjusted to account for seasonal factors that typically influence home sales.

November’s sales pace rose 4.7 percent on a monthly basis from 434,170 in October and was down 10.7 percent from a year ago, when 508,820 homes were sold on an annualized basis. Despite the fifth straight year-over-year sales decrease, statewide home sales maintained a 10.6 percent increase on a year-to-date basis.

“As we move further into the off-peak homebuying season, slowly rising interest rates will motivate savvy buyers to enter the market," said 2022 C.A.R. President Otto Catrina, a Bay Area real estate broker and REALTOR®. “With fewer active buyers in the market during the holidays, prospective buyers who may have taken a breather during the heated peak homebuying months can take advantage of this window of opportunity when there’s less competition and more homes to choose from.”

California home prices continued to stabilize in the off-season, dipping below the $800,000 benchmark for the second straight month. At $782,480 in November, the statewide median price was down 2.0 percent from October’s $798,440 and was up 11.9 percent from the $698,980 recorded in November 2020. The month-to-month statewide price decline of -2.0 percent was higher than the long run average of -0.1 percent recorded between an October and a November in the past 42 years but is consistent with the five-year average logged between 2016-2020.

“California’s winter housing market remains unseasonably resilient, despite market challenges of a lack of inventory, modest interest rate increases, and ongoing affordability issues,” C.A.R. Vice President and Chief Economist Jordan Levine said. “While we believe the market will continue to do well in 2022 as the economy further recovers, a widening imbalance between supply and demand will put upward pressure on prices and create headwinds for housing affordability that could slow sales in the upcoming year.”

Other key points from C.A.R.’s November 2021 resale housing report include: 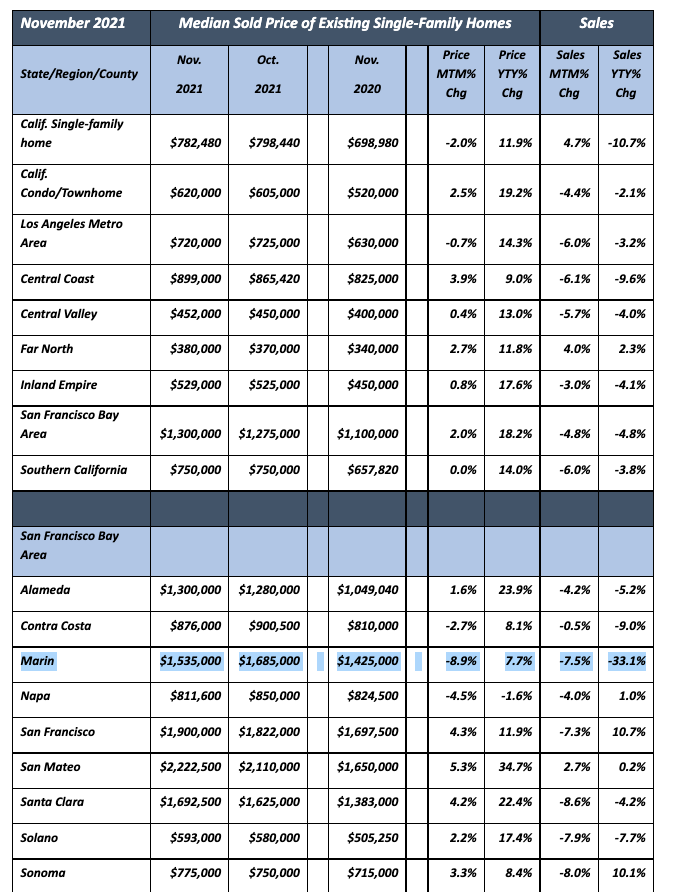 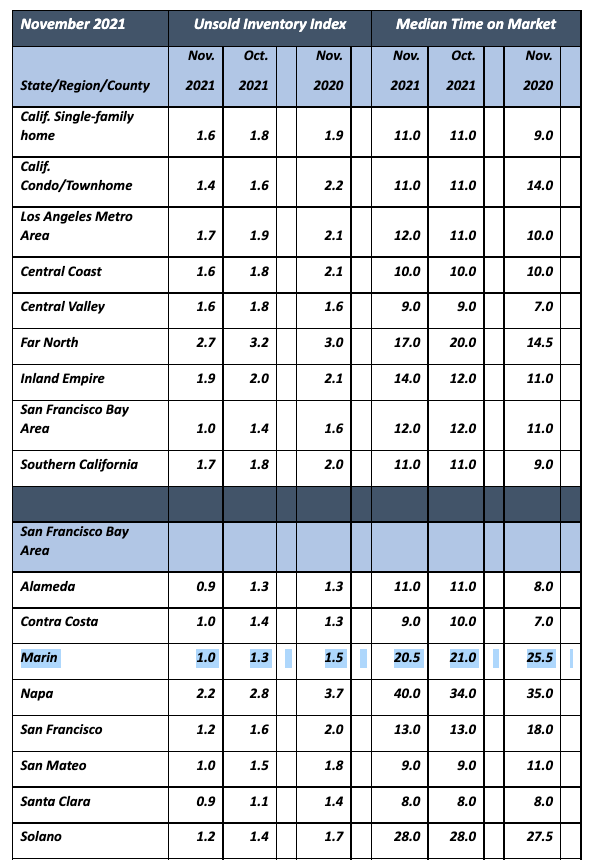